Every Wednesday evening Maui artist (and Maui Vista neighbor) Dale Zarrella gives a free guided tour of his sculptures at the Makena Beach and Golf Resort (formerly the Maui Prince Hotel). Not only do you get art and entertainment, Zarrella brings home-made chocolates shaped like little turtles. You can’t go wrong. Check with the resort to confirm dates and times.

Zarrella has four major works on display at the resort – two in the lobby and two in the restaurant downstairs. The two sculptures in the lobby are from Zarrella’s mermaid series: Mermaid Dream and Ka’ikehohonu (also known as 110 Turtles). Mermaid Dream began as a 3,000 pound Rain Shower tree root from which Zarrella removed 2,000 pounds of wood to reveal the mermaid. See Zarrella’s website (http://dalezarrella.com/) for a series of pictures on the making of this, and other, works. 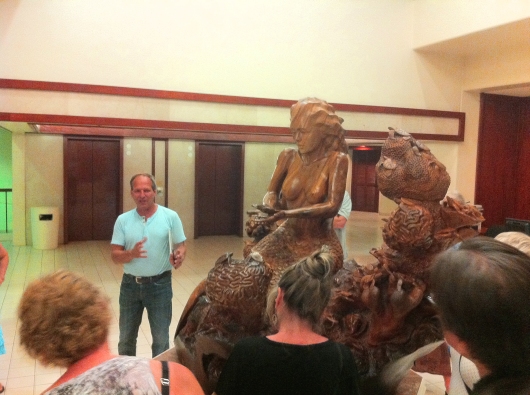 A life size bronze of the demi-god Maui holding the net by which he captured the sun can be found in the downstairs restaurant is. The net, we’re told, was woven from the hair of his sister Pele, the goddess of fire. I guess that must be why the net didn’t catch fire. (Click here for the story of Maui slowing the sun.)

The final piece of Zarrella’s work shows the bust and face of a woman emerging from a tree. The upside down stump turns the roots of the tree into wild hair blowing upward by the wind.

During the talk, Zarrella said the wood for this piece was found on Oprah’s Hana ranch while he was horse backing riding with some paniolo (Hawaiian cowboy)  friends of his.

See our other posts on Dale Zarrella:

Dale Zarrella and Helper Carve a Vision in Sand