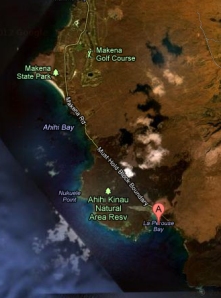 Getting to La Perouse Bay

If you drive as far south as possible through Wailea, Makena, and beyond, you come to La Perouse Bay. The drive takes you past Big Beach, through the Ahihi Kinau Reserve, and across a long stretch of lava from the last eruption of Mount Haleakala in 1790. After the manicured beauty of Wailea, the road gets narrower. Later it gets even narrower. Finally, it gets so narrow there are pull outs so cars going in the opposite direction can pass. The last few hundred yards are so bumpy you may want to park before the last turn toward the bay. Look for the horse corral and the stone monument. You can park there or bounce over the last bumps until you get to the water’s edge. It’s about 25 minutes south of Maui Vista.

The Hoapili Trail starts a few yards from the water’s edge on your left as you face the bay. The first portion of the hike is though a lava field. This, and other parts of the trail, need real shoes, not flip flops or sandals. Tennis shoes will do, walking shoes are better.

There are cultural artifacts in the lava fields – the lower walls of shelters built by Hawaiians sometime after the 1790 eruption. There’s not much to see, but some people find them interesting.

Look for the a small blow hole about halfway across the lave field. If the tide is high and the surf is up it makes a good splash.

A pretty bay greats you at the end of the lava field. After that you walk under the welcome shade of mesquite trees (locally known as kiawe). Lots of feral goats here. Keep a lookout for a surfer memorial on your right after you’ve walked for 5 or 10 minutes.

As you come out from under the trees you have three choices of route. You can keep on the “road” which will take you to the next shady grove or on to your destination at the end of Cape Hanamanioa. Alternatively, you can turn off the road through the broken wire gate and follow the King’s Highway cross the second lava field until you come to a sign that tells you it was reconstructed in its present form during the first half of the 19th century. If you take this route, turn right at the sign to return to the road or to the second grove. Finally, you can walk along a very rocky beach to the second grove.

As indicated in the map above, once you get to the second grove, there is an easier and harder route to the end of Cape Hanamanioa. The easier route is fairly boring, with little to see but lava and views in the distance. The harder route takes you along high cliffs over sometimes rough terrain with spectacular views of the bay and beyond. The water is multi-colored shades of crystal clear blue. Sometimes the trail is hard to find. Persevere, the rough parts lead to an actual trail. 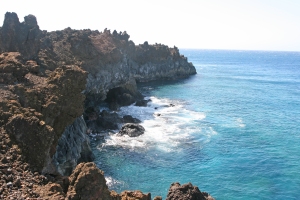 Views from the coastal trail

It’s often very windy at the end of the cape – hold onto your hat. One way distance from start to finish is about 1.25 miles. It will take you longer than you think.

From the end of the cape you can return or follow more trails (for miles) onto new coves, beaches and interesting sights. Enjoy. 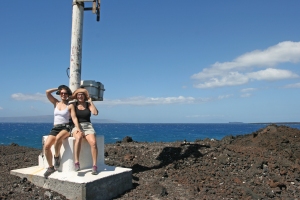 Hang onto your hat at the end of the trail