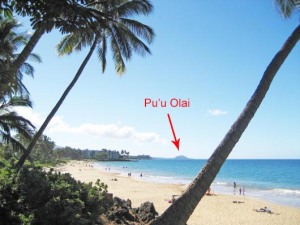 Pu’u Olai is a 360 foot tall cinder cone in the middle of Makena State Park. A dominant feature on the southwest coast of Maui, Pu’u Olai is visible from almost everywhere in west Maui and as far north as Olowalu on the road to Lahaina. If you want to get to Makena, just drive toward Pu’u Olai.

Big Beach is on the south side of Pu’u Olai; Little Beach on the west side, and Black Sand Beach is to the north.

Numerous trails lead to the summit of Pu’u Olai. It’s a short, but sometimes steep, hike. We took a trail that starts from the road to Black Sand Beach, maybe 50 yards from the parking lot at the end of the road. Most of the trail is entirely exposed, so go in the morning before it gets hot. Take water and enjoy the view. Hiking shoes, tennis shoes, or (at minimum) strap on sandals are recommended. Parts of the trail are composed of loose gravel – not a problem going up, but potentially hazardous coming down.

On a clear day you can see Mauna Loa and Mauna Kea on the Big Island, the uninhabited island of Koho’olawe, Molokini (where the snorkel boats go), Lanai, Molokai, and, of course, Mt Haleakala, the West Maui Mountains, and most of Maui. 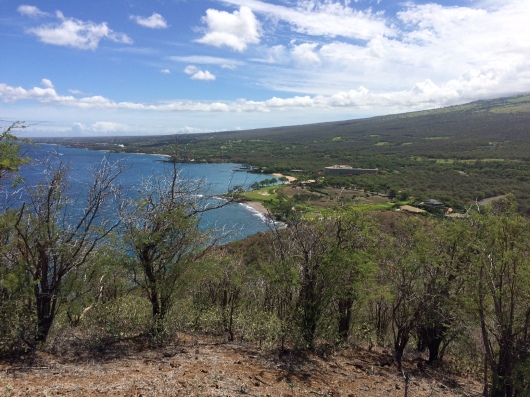 View toward Wailea from Pu’u Olai

School of fish at Molokini

There are many boats that will take you to Molokini for snorkeling. Some also go to “turtle town” where it’s likely you’ll see a turtle or two. (See our posting on “South Maui Snorkling – Makena Landing” for a no-cost option to swim with turtles.) Some trips to Molokini are longer and some shorter. Some provide food and drinks. Some do snuba at extra cost. (Snuba is sort of like scuba but without the  freedeom of movement and without the air tank on your back.) While we provide free snorkel gear at our condo, all the boats provide their own. Shop around to find the trip which is best for you.

The seas are generally calmer before the wind picks up so go in the morning unless you have no other choice. On a clear day you can see to a depth of 80 feet or more so the ideal time to go is a calm morning with no, or few, clouds. Of course, you usually have to make reservations in advance, so the conditions may not always be perfect.

Snorkel boats leave from Maalaea Bay – about a 20 minute drive north of Maui Vista. (They also leave from Lahaina, but don’t bother.) Take the road toward Lahaina and watch for the signs to Maalaea Bay. Allow time for parking and walking to your boat.

The Island of Molokini isn’t large but it looks tiny from the shore because it’s far away. Dependng on the speed of your boat the trip over will take about 45 minutes plus or minus. From December through March you’ll probably see whales while you’re cruising. If you’re lucky you can see dolphins any time of year. Some dolphins may even ride the bow wave and spinner dolphins can put on quite a show.

As the boat arrives as Molokini one of the crew will dive overboard with a rope. He or she will disappear below the surface to attach the rope to an underwater bouy. An anchor at the stern keeps the boat in place while you enjoy the sights. Each snorkel boat has it’s own designated bouy. I think they all say they have the best location.

You will see lots of fish and beautiful coral at Molokini – maybe an eel or two. In whale season you can sometimes hear the whales singing when you’re under water. It’s probably the premier spot to snorkel in Maui.

After as much time as almost anyone could want in the water, your boat will leave Molokini. If your boat goes to “turtle town” it will head east to a point just north of Makena Landing on Maui.

At “turtle town” there are two parallel lava tubes jutting out from the shore which support coral and form underwater caves. The turtles like to rest in these caves where they feel safe from the few predators that can do damage to a full grown turtle. While they can hold their breath for long periods of time, eventually these turtles have to breath. In this picture that Kathy took a large male is coming up for air. If you’re on the surface you can hear them hiss as they exhale. They’ll generally take a half dozen breaths or more before decending for another rest. It isn’t necessary to go to Molokini to have a great time snorkeling on Maui but, if you go, you won’t regret it.